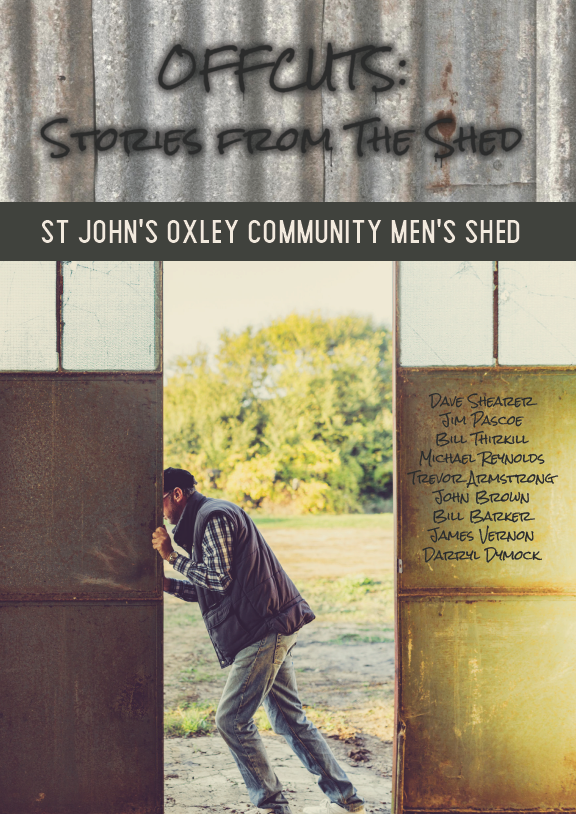 Stories from the Shed

This is no ordinary collection of stories. It draws on the varied experiences of nine men who have led very different lives, but whose paths have eventually crossed at St John’s Oxley Community Men’s Shed.

In this book these mostly first-time writers have taken the opportunity to share some of their fascinating stories from the past with their families and with the wider community. Many of these are never-before-told- tales, entertaining anecdotes that not only illuminate the writers’ earlier lives, but often trigger our own memories too.

In these stories we meet a former fitter and turner who as a boy decided to see what would happen when he packed gunpowder from leftover fireworks into a fruit tin and lit the fuse; a retired meat inspector who had to escape hand over hand down a rope off a high church roof when his ladder collapsed; an ex-plumber who starred in a Bollywood movie and dodged bombs and bullets while driving a tour bus in the Middle East; a former photographer who once had the ultimate hand in a boarding house poker game; and a retired insurance underwriter who relives his late-night dash home to dive under the bedclothes before the resident ghost appeared.

Then there’s a Vietnamese veteran driving an Army forklift who literally backed himself into an embarrassing corner with his commanding officer; an ex-teacher who was driving his prized first car through South Brisbane when the back seat caught fire; a former electrician who turned jackeroo to help out his mate on a cattle drive in northern NSW; and a retired agronomist who as a young man led a hiking group down a mountain during a cyclone, with intriguing romantic results.